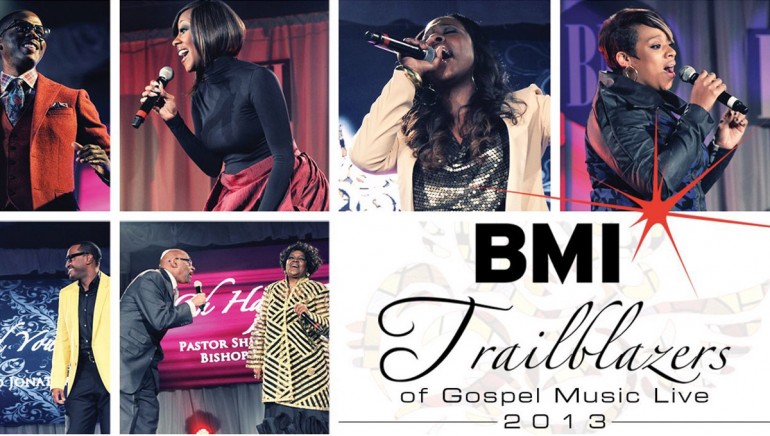 The date is fast approaching for the release of BMI Trailblazers of Gospel Music Live 2013, a new album from Broadcast Music, Inc., in partnership with Entertainment One Music (eOne Music). Recorded live on January 18 at the 14th annual BMI Trailblazers of Gospel Music Awards Luncheon in Nashville, the album features performances from Pastor Shirley Caesar, Le’Andria Johnson, Donald Lawrence & Company, Yolanda Adams, Kierra Sheard and many more. Each performer – including Anaysha Figueroa whose interpretation of “Holy One” leads the release of the album – delivered a rousing tribute to gospel leaders Edwin Hawkins, Lady Tramaine Hawkins and Kurt Carr, who were honored at the fete. The album has a release date of October 22 and can be pre-ordered now at iTunes and Amazon.

The BMI Trailblazers of Gospel Music Live 2013 album is groundbreaking in that it marks the first-ever recording from the performing rights organization. This new initiative is a milestone among PROs and signals BMI’s continued dynamic evolution and growth. In celebration of the accomplishment, BMI will host an invitation-only album release party with performances by Anaysha Figueroa, Jason Nelson, Jonathan Nelson and Lisa Knowles on October 22 in Atlanta.

“Releasing a live recording of the performances from the BMI Trailblazers of Gospel Music Awards Luncheon allows a wider audience to experience our salute to the legends of gospel music,” said Catherine Brewton, BMI Vice President, Writer/Publisher Relations, Atlanta, and Executive Producer of the album. “This project pairs some of the brightest stars in gospel music with iconic songs written and performed by trailblazers of the genre.”

Ray's Sister Publishing was established in 2001 specializing in Music publishing & protection and Web & Print media. For more, follow us on Twitter @raysisterpub.

We'd love to hear about your upcoming project. Tell us all about it by filling out our contact form.

Want to keep up with what's's going on at RSP? Follow us across our Social Networks.